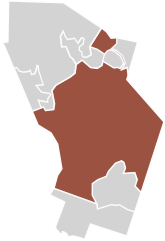 This farm is primarily a tradional sheep and beef operation that also provides grazing support for the Incorporation's two dairy farms.

Rodney Walker has recently taken over as manager of Upoko. His wife Vanessa works at a local farm retail store. Born and raised in Whakatane Rodney has spent all his working life on the land. A big part of his farming career was spent in the Gisborne and Wairoa districts where he progressed to managerial roles. However he's not new to the Taumarunui district having come from Pukepoto Station at Ohura.

Casey Chadwick, is the daughter of Faith Chadwick and Jack McLeod and grandaughter of well-known Taumarunui identity, Toddy Chadwick. Her knowledge and love of farming began as a child when she visited her Aunt, Julie Chadwick, on the Chadwick family farm on Hohotaka Road, Kakahi. 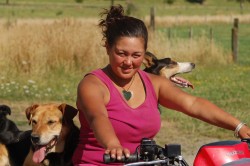 Before joining the team at Upoko Casey has been a rouser, dairy milker and most recently a fencer with the Tye family business based in Pureora Casey's initial impressions are that the farm is smoothly run, she's kept informed and her manager Jack is 'straight-up'. Her first priorities are to improve her pasture management skills and the handling of her dogs.

This year Te Uranga B2 Inc. sheep and beef farm 'Upoko' was a finalist along with Te Awahohonu - Tarawera Station and Te Hape Trust - Te Hape Station in the Ahuwhenua Trophy Awards for Maori sheep and beef farming. Rigorous judging and public field days of all finalists climaxed in June when Te Awahohonu Forest Trust - Tarawera Station was announced the winner. Tarawera Station received a replica of the Ahuwhenua Trophy, the original was donated in 1932 by the then Governor General, Lord Bledisloe (Lord Bledisloe donated also the Rugby Union's Bledisloe Cup). Tarawera Station was awarded a medal and prizes to the value of $40,000. The remaining finalists also received a medal as well as prizes to a value of not les than $15,000.To find out more about the Ahuwhenua Trophy click here. Kaumatua Harry Kereopa features at the start of Te Uranga B2's finalist video.